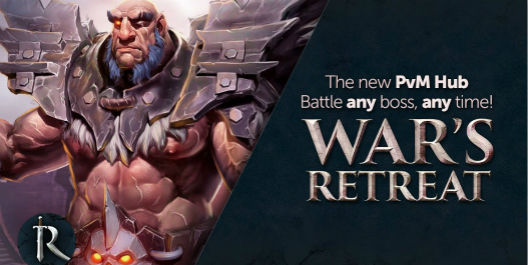 Together with Runscape's January 27th War's Retreat (or even the PvM Hub) update, many people are calling the Max Guild dead content. Is this warranted? Or are there benefits to both? How can they compare in access, requirements, and articles?

REQUIREMENTS: The Max Guild resets whenever there is a new ability published and needs you to have 99 in every ability. It needs a protracted quest series to access its town. Combat level 60 is only required by the Retreat of war and so is free-to-play. The Retreat of war is a definite winner , since it has low conditions that are finished by maxing anyway.

ACCESS the Retreat of War and the Max Guild possess runeless teleports to them. War's Retreat does demand 10 boss kills, which is negligible considering that the Giant Mole or King Black Dragon can easily get you that. Assuming you've got access to both, it's a tie.

BOSS PORTALS: The real reason is that they both provide quick access. The first time attuning each areas' portal site is absolutely free, then prices money. The Max Guild delivers a 50k coin reattunement and offers access to additional battle places. War's Retreat requires you to have a minumum of one kill on a supervisor, using a reattunement fee to that boss until you have 100 kills on it; it then drops to 50k. Once 100 total boss kills, you unlock a portal that is second with the very same restrictions. War's Retreat offers a portal to your Reaper job and another portal to the elite dungeon on rotation, each of which can be incredibly helpful. It is difficult to compare these; I'd say the Max Guild is better for bossing, but War's Retreat far outstrips it.

BONFIRE: Both regions offer a bonfire with a few critical differences. The bonfire of the Max Guild enables Cooking and Firemaking. War's Retreat, is much faster to proc and however, only gives the health increase, but takes no equipment. The downside is that it starts in regular logs (lasting half an hour ) and has to be updated with 1,000 Marks of War and 1,000 logs of raising level, using a total runescape gold price of over 9.7 million. For low- to mid- players, I feel the Max Guild is better, but the Elder log bonus can be easily unlocked by experienced PvMers after six hours of bossing.

DECANTING, BANK ALTAR: the two regions offer a service that is decanting, and Potions are essential for high level bossing. But, just War's Retreat offers decanting into flasks, making it a clear winner here. Both areas offer banks and altars that animate Prayer and Summoning points, but while the banks are liberated, you must unlock the altar after 200 boss kills.

OTHER SERVICES: The Max Guild is not a dedicated PvM place, therefore offers skilling benefits a vendor, a Grand Exchange stand, and two portals that don't have a requirement that is maxed. War's Retreat offers dummies such as the Lumbridge Combat Academy, adrenaline crystals (unlocked after 1,000 complete kills), along with also a high speed aura and aura/Sign of Life Play shop.

In nearly every category that is not a tie, the Max Guild is far outstripped by War's Retreat for PvM. If Jagex adds the Retreat of War and a GE stand such as individuals are requesting, the Max Guild will be almost completely invalidated. They know of people's comments and have said multiple times that the Max Guild should find an upgrade, so I am excited to find out what they bring into it. As a maxed player who's starting to enter bossing on my way I will be using both areas. I would prefer some changes brought to it, or turn it, although I would hardly call the Max Guild articles! I am certain that whatever may happen to it, it will be worth the wait, although that brings along several problems. Have a good whatever!