RS20 Miniquest | Once upon a time: Flashback! 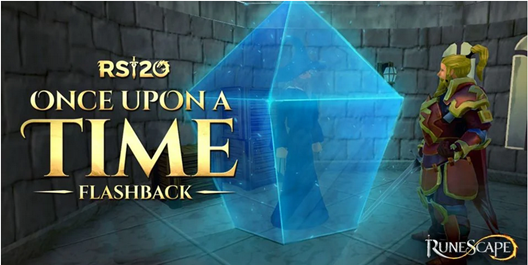 RuneScape’s 20th-anniversary story continues today with Once Upon A Time: Flashback. With this new mission, you rewrite Gellinor’s past to save his future by helping Closure the Ghost and Death save famous characters from premature death.

Apparently, Relom isn’t good again because they’re back in time to change the past by killing characters in RuneScape history. You have to finish the plan by reviewing the three classic tasks and setting the story straight.

Jagex reported, "In the feedback, the Relomian antagonist rewrites the old missions and changes Gellinor's history so that the protagonists die." "Players will ally with the mysterious Ghost Closure company, working alongside Death on a journey through three classic RuneScape missions to correct story events and bring the characters to life. Successful feedback rewards players with Medium XP and the Closure Book."

The new mission continues in the Once Upon a Time story, which runs through 2021. The year-round story is expected to continue to celebrate RuneScape’s history over the coming months "to provide adventures through the past, present, and future. A legendary game of life."

Jagex also recently announced an official RuneScape art book called RuneScape: The First 20 Years - Illustrated History. The book has been published by Dark Horse and is expected to arrive this fall. The deluxe version is available directly through the RuneScape Merch Store if you want a small extra gift.

RuneScape is still one of the most popular MMO games on the market when launched on Steam last year. Its spin-off, Old School RuneScape, recently came to the service as well, bringing nostalgia to a whole new audience.

However, not everything was as smooth as there were some login issues in the title last month that prevented some players from getting into the game. The issue has largely been resolved - so now is the time to continue our 20th anniversary.