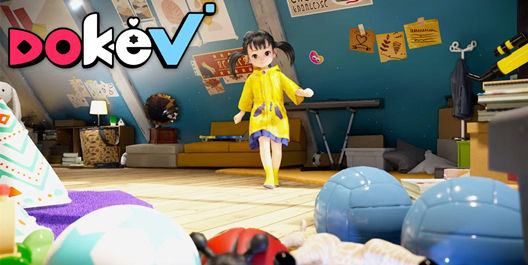 When it comes to MMORPG, we can always think of the veteran product "World of Warcraft" and the "FINAL FANTASY XIV" that has been in the limelight in recent years. In fact, in addition to these two familiar products, there are some games that actually live very well. Nourish, this includes "Black Desert Online" from South Korean developer PearlAbyss! The global revenue of "Black Desert Online" has exceeded 1 billion U.S. dollars! Relying on the proceeds of "Black Desert Online", PearlAbyss not only acquired CCP Games, the Icelandic developer, and publisher of "EVE Online", but also spared no effort to build an art center!

Everyone must have imagined "Pokémon" turning into an MMORPG. GAME FREAK hasn't taken any action, but PearlAbyss tried it! When I saw the trailer of "DokeV", I thought of "Pokémon" immediately! According to official information, "DokeV" is indeed an open-world action game (Creature-collecting open-world action-adventure) with a unique world view and a collection of various DokeV adventures. Of course, there have been products of the type "Temtem" before, but PearlAbyss is still very good in MMORPG. "DokeV" is even more anticipated in both the graphics and the gameplay!

In the trailer of "DokeV", we saw DokeVs with unique styles, and players can explore with them in the open world. There are various monster enemies in the game. We need to defeat them through an instant battle system. The design of this one reminds people of "Black Desert Online". PearlAbyss should not disappoint the players in terms of combat system design!

The protagonists also have a variety of freedom of movements, such as skateboarding, roller skating, alpaca riding, parachute flying, and even the paraglider swing in "Monster Hunter Rise"! Of course, these details will make you think of many other games, but "DokeV" combines them together and puts them in your own worldview. It also fits well, and does not make people feel abrupt!

In addition, the open world of "DokeV" is created by PearlAbyss' new engine, allowing players to travel between real and virtual spaces, which is very interesting! We also saw Hanok architecture, Haechi statues, etc., which are very distinctive! Various details in the trailer can make people see that PearlAbyss is very powerful and has its own style. It may not be rigorous to say that "DokeV" is "Pokémon" plus MMORPG.

As for why the game is called "DokeV", I found that the theme of this game is monsters. The Korean pronunciation of DokeV is doh-keh-vee, which means dokebi in Korean (the world in which it lives is similar to Pokémon! In addition, the game invites well-known composer Galactica to create K-POP-style theme music. If you like Korean online games, you can look forward to it. Are you interested in trying it? More news about DokeV at buyosrs.gold!