Path of Exile - what awaits us in the huge update 4.0 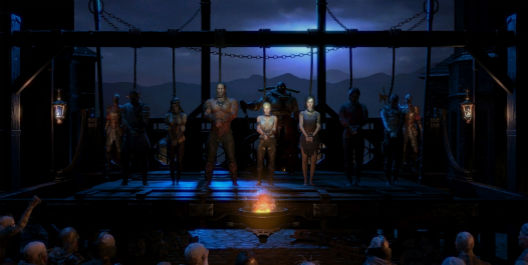 Yesterday, the well-known company Grinding Gear Games told everyone about the further development of its popular isometric project Path of Exile, in particular, it shared details about the upcoming 3.9 and 4.0 patches. We can say that the most interesting thing for users was the update 4.0, because in essence it can be called Path of Exile 2 due to the huge number of various changes and innovations, we will just examine them a bit below.

To begin with, the second part does not have an exact release date, and beta testing should begin only at the end of 2020. For this reason, those or other features described below should be considered only as a new concept, because over the course of a year with a little progress, the development process can change several times. Update 3.9 will be released on December 13 of this year.

The presentation of the second part of Grinding Gear Games began with a demonstration of the updated game engine, under this term is meant the improvement of almost all aspects of the game process, from all kinds of animations to character models. It is worth noting that this is a significant improvement in the technical side of the client, even taking into account that the developers have made such upgrades more than once, but many are now worried about the issue of optimization.

A new adventure - update 4.0 will bring with it a new storyline campaign, its events will unfold 20 years after the “first part” and most interestingly, users will have a choice which line to go first. You can also coincide with the appearance of a new choice of the character’s window (picture above) and, of course, new characters. It should be noted right away that no matter what company the user wants to go through, he will be content with all the advantages of the updated game engine.

Increasing complexity - at the moment, if you compare the current bosses / opponents with that shown in the demo of the second part, it becomes clear that an attempt to kill a small pack of blue + white opponents at the initial level can be fatal. Also, this point should include future edits of opponents' resistance, if I understood correctly, the developers are likely to lower it, so that users will more often have control effects.

A new approach to ability stones - stones (gems) will no longer be physically inserted into special slots (sockets) of your equipment, instead a new Skill Gems tab will appear. And also sockets will appear in the stones, then I will try to explain all this to you with a concrete example. Let's say you have a body in which there are two red sockets, when equipped, an icon will appear in the new interface and two lines to the right where you can insert two ability stones. In the first line, insert the Leap Slam gem with two red sockets, after this action two more connected sockets are available in the interface into which support stones can be inserted.

There are several more interesting innovations associated with the above system:

• Only active abilities have sockets, with the exception of meta stones - these are special stones that can be inactive and provide a passive bonus.

• If you decide to shove several auras into one meta stone, an icon will appear on the ability panel for simultaneous activation.

• By default, all sockets in the new interface are interconnected, so making 6L will be very simple.

• When choosing a support stone, the system will automatically show where it needs to be inserted, thereby simplifying the process of studying the game and asking “Why does this stone not work with this ability?” Disappears.

• Two-handed weapons and bows have four sockets by default, and in the case of a bow they will always be green.

• As before, the colors of the sockets can be freely changed, and if I understand correctly, their number, too. Moreover, the quality of the stones increases the chance to get 6 sockets.

• There will be an opportunity to transfer experience from one stone to another.

• In the new interface, the ability damage is displayed on the right, taking into account all installed modifiers, and it also seems to me that when you click on the special arrow, detailed information will appear.

New abilities and ascents - along with 4.0 a huge number of new gems and 19 climbing classes will come, and in the first case, some stones will appear already in update 3.9. It is especially worth noting that the developers finally added Shapeshifting stones, with their help, on the go without any castes, the character will change its shape to another. There will be several given forms (mentioned a cat, a wolf (werewolf), a bear) and most importantly, the character will still be able to use other abilities, but they should be suitable in meaning to the current form.

Based on the demonstration of gameplay, the forms themselves have passive skills, when turning into a wolf, the movement speed increases by 20%, incoming * damage will be reduced by 50%. To reinforce interest in such unusual abilities, there will be one class among the new elevations, with emphasis on changing shape, this is enough for me to go as Cartman to wait until the end of 2020 throat in the snow.

During the stream, the developers demonstrated several new ascents for the ranger (archer). I want to immediately explain that Survivalist and Beastmaster have the last three options - this is one ability to choose from, after which the other two become inaccessible.

• Death from Above - gives the character a new meta ability Flare Arrow. Fires a special marker on which related abilities will be projected.

• Warmark - Adds +1 charge to Flare Arrow, enemies located near the marker will be suppressed.

• Siege Warfare - after installation, the totem connects all the closest enemies. That is, the farther the opponents are from the totem, the more their movement speed decreases.

• Close Combat Specialist - holding a bow, allows you to use the melee abilities available to swords and axes. Increases melee damage by 10% when using a bow.

• Division - here I did not quite understand the translation, so I’ll leave the original. Gems socket in your weapon grant two skills, one supported by greater multiple projection, the other supported by barrage.

• Multiplication - Every second, your next ability will fire with one additional projectile. It is summed up to five times, that is, we wait 5 seconds and then use the skill.

• Spell Avoidance - gives a character a new ability. After use, it converts the chance to dodge physical attacks into magic ones. In addition to this, converts Evasion Rating to Spell Evasion Rating.

• Born to Be Wild - if I understand correctly, damage in the form of a cat increases by 10%.

• Ally of the Cat - Allows you to summon a wild cat as a companion. Hangs on the character aspect (most likely the buff) of a wild cat.

• Panther Companion - replaces a wild cat with a panther. Hangs on the character aspect of the panther.

• Cheerar Companion - replaces a wild cat with a cheetah. Hangs on the character aspect of the cheetah.

• Lion Companion - replaces a wild cat with a lion. Hangs on the character aspect of the lion.

• In some locations, the game will return to a gloomy and oppressive atmosphere.

• Changed the animation of the portal.

• Redesigned icons for many items.

• New equipment will appear, for example, Scythe as an archetype of weapons.

• Dungeons will be created randomly, that is, going into, say, a cave, you will not always find another way out. I wonder if this will work in the old (current) company.

• Must change the tree of passive skills.