Magic: Legends is a perfect mix between cardgame and Diablo 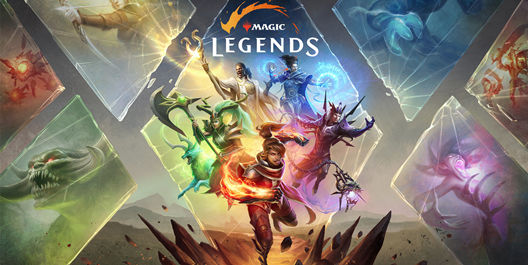 Magic: Legends, a new action RPG, looks a bit like Diablo on the surface but Cryptic Studios' new free-to-play multiplayer video game has its own pace and style. The trick is in how he applies the mechanics of the original universe: the collectible card game from Magic: The Gathering.

In Magic: Legends, players take on the role of planeswalkers, powerful spellcasters from the Magic lore. Each has its own basic combat specialty: the Geomancer fights with his fists while the Necromancer has a whip-like censer for his mid-range attacks. The classes also have a cooldown and ultimate abilities to match and combine with these powers: one is for doing damage over time while the other must be charged for a long time for massive damage once or twice around.

Players can use the mouse and keyboard just like in a traditional ARPG, clicking on the ground to mark a destination for their character and go wild with the attack keys. Alternatively, a WASD movement mode allows MMO and FPS players to adapt more easily. Basic combat is fluid and fun, although at the moment the enemy AI behaves more like a team of children playing soccer than a real fighting force.

Things get a lot more interesting with the game's hotkeys. Players put together a small deck of 12 spells before launching into battle, all drawn from the long history of Magic: The Gathering. Each one, just like in the card game, will require a certain amount of mana to cast and will have attack and defense values ??in the classic X/X style. All cards are displayed in your hand, which is your shortcut key list numbered from one to four, randomly.

Just like in a traditional analog Magic game, players never know which hand they will receive or which cards will come out over the course of the game. This means that you will have to adapt on the fly. Perhaps your favorite combo will only appear once or twice every 10 minutes, or perhaps you will be given a terrific hand and destroy enemies with ease.

I personally had some problems with card recognition during my first game. Although the spells are drawn from Magic lore, the graphics on those spell cards are not. This makes sense, in a way, since there isn't much room on those tiny hotkeys along the bottom of the HUD. It would have been nearly impossible for the rich and detailed graphics of the modern card game to make sense on that scale.

So how much content will be available at launch? The game's developers said they expect around 30 hours of gameplay to unlock all of the base spells for the game's five planeswalker classes. In addition to this, you will be able to collaborate with other players to tackle particularly challenging difficulty levels and you will be rewarded with all Magic Legends Aether needed to create new cards and improve old ones.

After launch, fans can expect a steady stream of new free-to-play content to roll out over time. Narrative content will always be free, the developers told us and will include new storylines, new enemies, new regions, and more. Microtransactions won't include things like level or progression.