How To Complete The Golden Party Hat Hunt 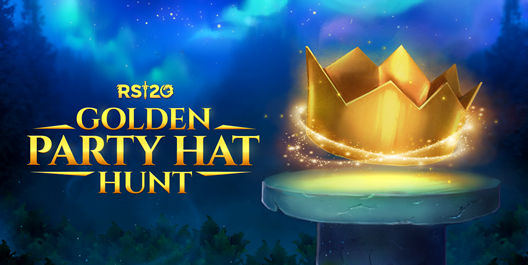 RuneScape is a dangerous world full of dangers and enjoyment, so you might think that the most precious items are super powerful weapons or armors? Incorrect! Most RuneScape players know that there is one item in Gielinor that can rule all of them - a powerful party hat.

In the brilliant 20-year history of RuneScape, only six-party hats have been released, but in this 20-year celebration, RuneScape will add a seventh. After all, what can celebrate the 20th anniversary better than paying tribute to the 2001 Christmas event? Say hello to the golden party hat!

Whether you want to complete the party hat collection or just invest in what will become a high-value item in the future (yes, it is tradable!), the golden party hat is Gielinor's new must-have fashion accessory. If you don't want to miss this opportunity, you need to pay attention! The Golden Party Hat Hunt will begin on November 22nd and will end on January 3rd. Only one golden party hat can be made per account.

To get the golden party hat, you first need to become a RuneScape member, and then you need to collect the fragments to obtain 8 of the 11 fragments that may be distributed in the game. Throughout the anniversary event, you can find them in the following events:

1. Talk to the Wise Old Man who is waiting for you outside the Grand Exchange in Varrock.

2. Complete the 'Once Upon a Time in Gielinor' Anniversary quest.

3. Every time you earn a Mark of War, there is a chance to earn a shard.

4. Shards are also a possible drop from completing Clue Scrolls.

6. One shard can be had when training Gathering skills (Mining, Fishing, Woodcutting, Farming, Hunter, Divination, Archaeology).

8. One shard can be had when training Support skills (Agility, Thieving, Slayer, Dungeoneering).

9. Another shard can be obtained at Level 15 of the free track in the Christmas Yak Track event.

10.One shard can be purchased with 30 million in-game OSRS gold.

11.One shard is given with Premier Club 2022 membership purchase.

Once you have 8 pieces in your inventory, just go back to the smart old man at Grand Exchange and he will magically turn them into coveted golden party hats! Please note that the extra fragments cannot be traded and have no other purpose. Wear a cute golden party hat to celebrate Runescape's 20th anniversary. Don't miss this once-in-a-lifetime opportunity to get a golden party hat!