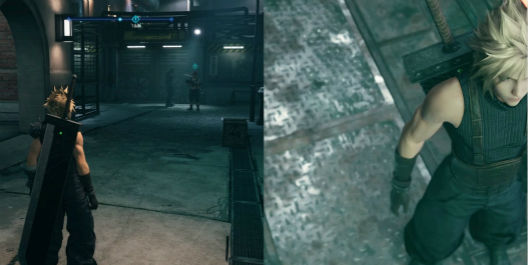 Among the expected gaming innovations of 2020, a remake of the seventh part of the famous Final Fantasy series stands out. Despite the fact that a few months before the release of the game (so far scheduled for April 10, 2020), today the owners of the PlayStation 4 consoles got the opportunity to download the Final Fantasy VII: Remake demo for free, just visit the game’s page in the store and scroll down.

In this article we will analyze the various features of the gameplay (which were available), and I will also express my personal opinion about some controversial issues.

From the entire demo, I decided to single out two features that should be paid close attention: graphics and an unusual battle system. Please note that the final product will contain much more chips that we know about and possibly do not know about. For example, I expected to see at least a glimpse of a system for improving weapons through matter (special stones, one of which can be seen in Cloud's railroad tie). I don’t want to touch on the topic of locations, sound and plot (it’s better to wait for the full version of the game).

Graphics - by itself, has improved (compared to the original) and looks good for the 2020 project, it is noticeable how well-developed models of characters \ opponents and locations. Although in some places I had textures, to put it mildly, of poor quality (this is noticeable in the picture below), maybe this can be attributed to my PS4 fatka.

In general, the picture looks decent for consoles (it was foolish to expect another from Square Enix and the current PS generation), and there is no desire to turn off the game after the first minutes. Except that in places they only annoyed ladders on Cloud's textures and hairstyle (oh, this is smoothing).

The combat system is perhaps the main component, which makes the game a complete remake, and not just a remaster. Most likely, following the latest trends, the developers decided to move away from the traditional for Final Fantasy turn-based system, replacing it with some kind of hybrid action, crossed with a tactical pause.

In other words, each battle with an adversary takes place in real time, and not like in JRPG with jumping models awaiting the orders of a wise user, but still has to manage a group of several characters.

Each character has: a regular hit, a special ability, which may turn out to be an unusual movement or a change in the battle mode, a block (cuts incoming damage), roll, several tricks and skills, as well as a unique limit breaker (a kind of ult).

In the action mode, the battle process is simple: we strike to accumulate ATB energy (it constantly accumulates in the battle, but slowly) - it is spent on the use of techniques / objects, we periodically dodge \ put the block so as not to absorb too much damage.

There are a number of very important points:

● In battle, characters that are not controlled by a player are controlled by a computer. Even if they do damage, the speed at which ATB energy is received is much lower. Therefore, it is important and needs to be switched periodically in order to quickly accumulate it for damage or just in case.

● Each character differs from another in unique features, switching between them in battle except for the regeneration of ATB is sometimes very useful. For example, the brutal male Barret is able to heal, he has a useful range ability, and he can also influence the robots with electricity.

● All opponents have a kind of strip of exhaustion. As damage is done, it fills up and as soon as it reaches 100% the enemy will be inactive for a certain period of time, and damage will increase significantly. This is a very nice feature, especially in battle against ordinary opponents, which in this way can be eliminated very quickly.

● In addition to rolling, any other actions are not able to interrupt the animation of the character’s attacks, that is, for example, the block can be delivered only after the current animation is completed (and even with a slight delay). This is important to consider if you will be held at the highest level of difficulty.

● If at the moment of execution of the order (say striking \ using a potion) the character is affected (pushed, knocked over, etc.), the animation will stop and you will have to repeat everything in a new way. This happened to me very often on the final boss because of my carelessness.

With the action mode more or less sorted out, go to the tactical pause. In battle, press X or either of the two triggers, the world around you will slow down significantly, thereby allowing you to give the character / characters an order to use the technique / skill or item. Outside of battle, a pause also works, but without the effect of slowing down time, it will be possible to use only objects. In theory, everything sounds great and believe me, you will use the pause often, especially when fighting bosses / strong opponents.

However, the system itself was implemented in a very unpleasant way - a pause works until the first command, roughly speaking, after which time resumes.

Thus, in order to give orders to several characters at once, you have to make many extra movements. And for this small period, the boss may have time to start casting something bad. Agree, this is very unpleasant and I would like the pause mode not to turn off immediately, but at the behest of the player.

Moreover, in the demo you need to manage only two characters, then the size of the group should become larger, and the purpose of the characters - more diverse. As a result, gradually the “special” activation / deactivation / activation pause cycle after each order can be very annoying.

To summarize, in general, the impressions of the demo are more positive than negative. In principle, I so imagined this in 2019, when they showed a small piece of the gameplay. Of course, I would like more content, like, say, in the demo of the second Nioh and slightly change the tactical pause so that you can effectively give orders to all members of the group immediately.

If before I doubted whether it was necessary to buy a game, now I can pre-order it already next week or buy it after release. What do you want to say, welcome to leave a message!