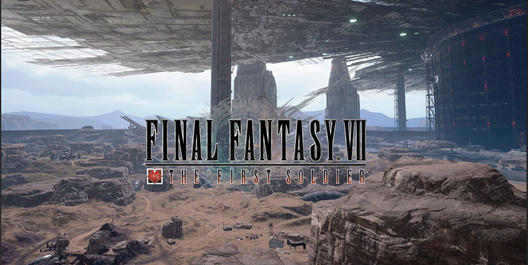 At present, in the game market, MOBA and competitive shooting products are popular. In competitive shooting games, the battle royale gameplay has always been the mainstream and is deeply loved by players. Representative products include: "PlayerUnknown's Battlegrounds", "Fortnite", "Apex Legends", "Call of Duty: Warzone", "Knives Out" and more. There is a huge market in this area, and many major game makers want to get a share of the pie, and SQUARE ENIX is no exception.

Previously, SE said that it would launch a new mobile game "Final Fantasy VII The First Soldier" in 2021. Recently, the closed beta test of the game has officially started. Let us share with you today. Let's take a look at this new game "FINAL FANTASY VII" A battle royale mobile game with a background world view.

The battle arena of the game is naturally Midgar, and the player will play the role of the candidate of the Shinra warrior, fighting for the purpose of surviving to the end. The basic gameplay of the game is similar to other chicken-eating games. The main difference should be the so-called STYLE setting. Personally understand that this is the so-called professional concept. In addition, the game currently supports matching modes of "SOLO" and "TEAM (a group of 3)", and the so-called "chocobo ranch" mode has not yet been opened, and it is not clear what it is.

STYLE is currently divided into four types: warrior, wizard, martial artist, and archer. Warriors are good at dodge and can also "suck blood" in close-range attacks. Because there is no sound when attacking with swords, fighters are especially suitable for fighting indoors; sorcerers are naturally very good at magic professions and attribute magic such as flame, freezing, and lightning is useful. Land and the defect are naturally afraid of close combat because magic has a cooling time.

A martial artist is a character who is good at defense and recovery. He can set up a so-called defensive wall in front of him and has the ability to accelerate HP recovery. In terms of attack, it relies on fast-moving unarmed fists or firearms found in the game scene. Whether it is close combat or long-range attack, it has its own uniqueness; the abilities of archers are relatively mixed, magic and weapons are both One point, the most distinctive ability is to "see through", to be able to find player characters hiding in the house, and to "mark" on player characters that have done damage.

In the "SOLO" heads-up mode, the STYLE can be freely selected, while in the "TEAM" mode, the STYLE cannot be repeated. This reminds me of the setting of "Apex Legends". Midgar is inhabited by some monsters (NPC), After defeating them, there will be a chance to obtain rare firearms or items. In addition, the game has also added a level setting and defeating the enemy Shinra Warrior candidate (enemy player) or wild monster can gain experience points and increase the level. The higher the natural, the stronger!

In "Final Fantasy VII The First Soldier", both monsters and vehicles are derived from "Final Fantasy VII", which gives fans a sense of substitution! Seeing that there are vehicles such as trucks, motorcycles, etc. in the game, my favorite is of course Chocobo, which runs quite fast! There are also vending machines (public telephones, benches and other facilities) scattered in the game scene, and we can use game currency to buy things.

The biggest feature of "Final Fantasy VII The First Soldier" is to make the player's battle less dependent on guns. If you are proficient in melee attacks or magic (using magic spar) combat, you can also perform well, so you can get an experience that is not available in other battle royale games. Of course, the real master must master the various combat methods in the game, and adopt different combat methods according to local conditions at any time! The game is still quite distinctive, it is worth paying attention to.

To know more about the latest game news, welcome to our news page!