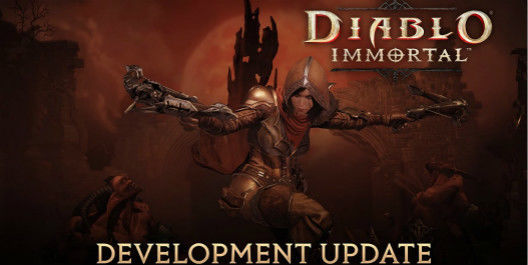 Diablo Immortal's mobile game caused huge controversy when it was released in 2018, so it was very low-key afterwards, and there is finally new news recently! Recently, Blizzard officially invited global media and some Australian players to participate in a limited-time "Diablo Immortal" Alpha technology test, while the development team also accepted many media interviews. The game’s current level of completion is very high. Today I will share with you the latest development and content of "Diablo Immortal".

In the Alpha technology test of "Diablo Immortal", the game opened four roles: barbarian, monk, demon hunter and occultist, and there should be six professions in the official version. The current level limit is 45, while in the official version it should be 60. The story of the game is brand new, between "Diablo 2" and "Diablo 3", which is the story after Tyrael destroys the World Stone in "Diablo 2" at the end.

The player’s birthplace is the village of Vosam, when Tristram was still in ruins. There are six large-scale world regions in "Diablo Immortal", including Bilefen and more. Specific PVP events will occur in the area, and treasure chests will be refreshed every few hours. Players can compete with each other here, and those who survive in the end can get rich rewards.

Since it is the "Diablo" series of games, the dungeon is obviously indispensable. When challenging the dungeon, players can choose to play alone or in a team; the higher the difficulty, the richer the rewards. If you want to get more powerful equipment, you can also go to the ancient secret realm to challenge. Obviously, "Diablo Immortal" is very similar to "Diablo 3" in terms of the mechanism of exploring maps and brushing treasures, but there is also a world boss design in the mobile game!

When the character is in battle, you can choose 5 from 12 (14 in the official version) skills to use. After the character is at full level, the peak level system will be activated. There are currently 4 skill trees with different gameplays to choose from, and you can switch at will when you are not in combat! In terms of equipment, players have to create 13 parts, including head, chest, shoulders, hands, waist, legs, feet, main and secondary weapons, 2 rings and 1 necklace, as well as a unique charm field, charm charm Up to five different skills can be upgraded. There are also legendary gems, which can be installed in the main slot. A character can be inlaid with up to 6 legendary gems.

The system provides players with a dismantling system. We can dismantle unnecessary equipment to obtain specific materials. These materials can improve the equipment level and recast attributes. In addition, the official has opened a market where players can trade materials. The transaction is anonymous, and the items cannot be exchanged for cash, and can only be traded at the official existing price. After reading the above introduction, the doctor thought of a lot of Krypton gold mobile games, their settings are exactly the same, I hope my idea is wrong.

The official said: "Diablo Immortal" is free to download, and paid products will be more rewards Diablo Immortal Gold or more convenient items, such as: battle pass mechanism, "mysterious stones" that can increase the number of secrets rewards, and can reduce the random range of attributes "Recast stone" and so on. In addition, the production team emphasized that the things that can be purchased with cash are not necessary items or conditions, so everyone can get all the equipment without recharging, and they can also complete the plot.

In other details, the frame rate of "Diablo Immortal" is set at 30FPS. If the phone supports it, it can be adjusted to 60FPS. Currently, there are no automatic functions in the game (such as path finding, sweeping, hanging up, etc.). After watching, are you looking forward to the launch of "Diablo Immortal"? More Diablo Immortal updates are here!