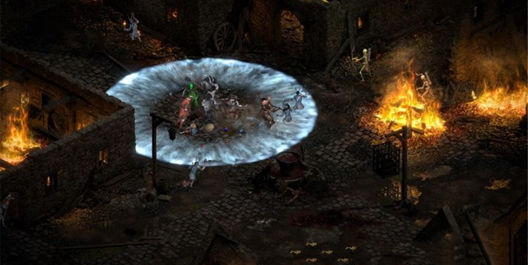 "Diablo 2: Resurrected" introduces some official information about "Diablo 2: Resurrected". The basic content of the game is exactly the same as the original version. The trading rules, equipment drop, and career values are completely inherited, and even some well-known old bugs are retained.

The difference is that the original 2D texture module has become a new design for 3D physical rendering, and some modern convenience functions have been added, such as storage box sharing, automatic picking equipment, automatic teaming functions, and so on. What is the effect of such a remake? Will it repeat the mistakes of "Warcraft III: Reforged"? The good news is that most fans are very satisfied with this remake!

The Alpha test of "Diablo 2: Resurrected" has been launched in some countries and regions. Many game anchors and lucky players have qualified for the test and the appearance and details of "Diablo 2: Resurrected" are shown in the game live broadcast. This time The "remake" is quite satisfactory. It can not be said that all fans eat it with relish, but the basic needs are met.

This Alpha test allows players to experience three professions, namely Amazon, barbarian and magician (mage). Everyone can play until the second chapter, which is the city of Lugoin, save Tyrael after defeating Durell. The picture of the game is very comfortable, and the effect of 3D physical rendering is very good. What is interesting is that you can also switch back to the old picture of the original "Diablo 2" with one click, and reminisce about the taste of retro.

In addition, everyone is very satisfied with the automatic picking up of equipment and gold coins. After all, the players who picked up these things have grown old and can no longer withstand the torture of a crazy mouse. From the early hours of the morning, qualified game anchors and players have poured into the game, resulting in hour-long network congestion. Everyone entered the game and saw all kinds of clear and three-dimensional monsters, and they all felt good.

There is also an interesting point: "Diablo 2: Resurrected" supports the host, and the official has also adjusted and optimized the handle operation. Blizzard hopes that through this remake of the game, as much as possible to let more players recall the classics of the year. The doctor walked around on the overseas forum Reddit and found that everyone's evaluation of "Diablo 2: Resurrected" is pretty good. Most players don't want to add too many new things to the remake to become four different things.

Blizzard's goal of this remake is very clear. Since the gameplay of "Diablo 2" will not be outdated, it is only optimized for the screen. At the same time, when the game was released, there were no exaggerated promotional videos, and the lessons from the last time were completely learned, which resulted in good feedback. Game fan of the year, will you come back?