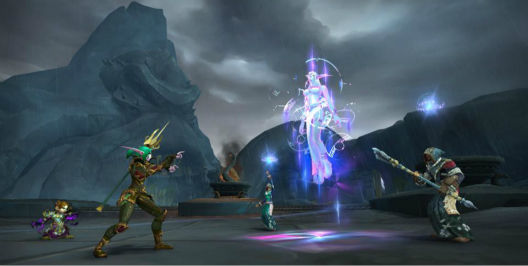 The role-playing giant "World of Warcraft" fought in 2005 with a plague that wiped out almost the entire online population of the game. How the data from back then help doctors with corona research today.

It is the year 2005. The online role-playing game "World of Warcraft" is one year old and is extremely popular. Thousands of players cavort on the servers and experience adventures together in the huge fantasy world. But then a plague broke out, which today gives researchers insights that a simulation could never do.

"World of Warcraft" epidemic helps against Corona: what happened?

In "World of Warcraft" players can join together in larger groups to master so-called dungeons. These are areas that are separate from the outside world and where particularly strong creatures can be fought for special rewards. Such a dungeon was "Zul'Gurub". There, players received a negative effect called "Corrupted Blood" on the final boss. This effect harms other players and is transmitted when you stand close together.

It was never thought that this effect would reach the outside world. However, some players with one trick managed to bring the "Corrupted Blood" to the capital cities of the game world. At weddings there were hundreds of players in a confined space. It was the beginning of an epidemic that never ended. The epidemic also spread to non-player characters (NPCs) who did not die due to the high number of lives, but still transmitted it.

The outbreak was particularly bad for low-level characters. The "Corrupted Blood" effect was intended for players at the maximum level to complicate the battle with the final boss in "Zul'Gurub". Low-level characters had less life and died very quickly from the plague. The epidemic could only be ended by restarting the server because it got out of control.

Findings thanks to the "World of Warcraft" disease

Nobody would have thought that the 2005 incident would ever be useful, apart from a research group led by Dr. Eric Lofgren. Lofgren is an epidemiologist at the University of Washington State, where he researches coronavirus. In 2007 he wrote a scientific paper on the "Zul'Gurub" disease. In an interview with PCGamer, he talked about how his experience with the plague in "World of Warcraft" helps fight the corona virus.

Lofgren's "Zul'Gurub" disease gave him the opportunity to observe the spread of such a disease in a safe environment. In his research, he equated low-level characters with people who would be particularly at risk in the real world. He compared the NPCs to organisms that carry the pathogen but show no symptoms.

Lofgren told PCGamer how he applied his research to his work on the coronavirus: "For me, it was [the Zul'Gurub disease] a good example of how important it is to understand human behavior public health respond to how these reactions affect the way things go. "

The Zul'Gurub epidemic, in his view, has shown very well how people react to a virus. You could not say: "Yes, all right, everyone is going into quarantine. Everything will be fine". Because that doesn't happen.

Lofgren still sees a possible comparison that fits the current corona crisis well: "And they may not really make people sick on purpose, but knowingly ignoring the possibility of infecting other people comes pretty close to that. You see, that people say, 'Oh, it's not all that bad, I'm not going to change my behavior, I'm going to the concert and then I'm going to visit my grandmother anyway.' Better not do that. It's the most important thing. Epidemics are a social problem. "

In fact, during the "Zul'Gurub" epidemic in "World of Warcraft", players did not simply die and then stop playing. Quarantine camps have been set up to protect low-level players. Healers have traveled around and brought the dead characters of the players back to life. There was a strong sense of solidarity.

In the real world too, more and more people are showing solidarity due to the corona crisis. People applaud from balconies to thank the helpers and neighbors help each other and do the (WoW Classic Gold)shopping for their older people.

So it is important to stay at home, wash your hands and keep your distance.

The Robert Koch Institute answers frequently asked questions about the coronavirus on their website.