"Animal Crossing New Horizons" is updated, why does Nintendo lower the deposit interest? 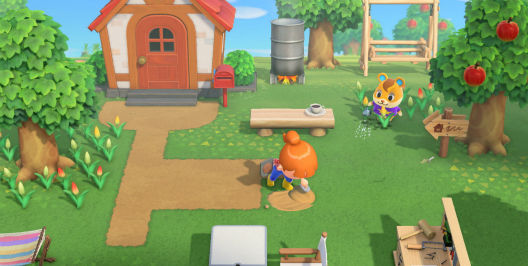 Players have discovered a large number of new gameplays of Animal Crossing New Horizons, some of which have been officially confirmed, telling the announcement of Nintendo, telling players that "Animal Crossing New Horizons" will launch a free update of "1.2.0" version. This update includes a series of contents such as "ran Ran" for gardening merchants, upgraded art gallery in museums, and "foxtail treasure ship" in "Nine Tail Market".

One thing you may not notice is that the deposit interest in the game has been adjusted. If you are an ordinary player and experience life slowly in "Animal Crossing New Horizons", this adjustment will have little effect on you. So why does Nintendo adjust the deposit interest of the in-game ATM?

We know that many of the game settings in Animal Crossing New Horizons are consistent with reality, such as the use of time in reality and so on. There are also some real-life construction facilities in the game, such as Nook Bank. Players can deposit their Bells into Nook Bank's ATM, and the ATM will give players interest based on the amount of Bells deposited by the players. The rules of interest are: At the beginning of the month, ATM will pay 0.5% of the deposit amount at the end of the previous month as interest.

In "Animal Crossing New Horizons", the amount of interest that players can charge is limited, and before the "1.2.0" version update, the maximum interest rate is 99999 Bells (requires 20 million Bells deposits in the bank); After the "1.2.0" version is updated, the upper limit of interest amount is reduced to 9999 Bells, which means that players who deposit more than 2 million in ATM will not receive excess interest.

Officials naturally only announced the reduction of interest, and there was no reason to publicly cut interest rates. The doctor personally speculated that this was the official means of countering the "space traveler". Because some players in "Animal Crossing New Horizons" like to modify the system time, they use ATM interest to make Bells, for example: you can use time magic to earn 99999 Bells in a few minutes, and the system will not because of Such time operations give players any penalty. The official modification naturally makes the Bells-making efficiency of "time traveller" not as high as before.

We know: In Animal Crossing New Horizons, Bells is still very important. At the beginning, Ricke owed a large sum of Animal Crossing Bells to buy Unmanned Island. Later, whether it was the expansion or relocation of the island, he needed to borrow Bells from Ricket to repay. If there are loopholes that allow players to quickly spend Bells, it will seriously affect the balance of the game and the economic system, so Nintendo will announce a reduction in interest.

When the game first came out last month, players discovered the Animal Crossing New Horizons unlimited copy bug. Players can use this bug to quickly brush Bells, but this loophole was quickly fixed by the official.

Animal Crossing New Horizons is a slow-paced game that players can enjoy casually. Using "time magic" or various loopholes to speed up the game process, it is easy to lose the enthusiasm and motivation to play this game. I suggest that you still have the patience to fish slowly and catch insects to make Bells, don't be played by the game.